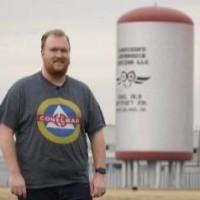 My name is Drew Kirkman. I'm 34 years old, born in Owensboro, Kentucky, and I'm a self-proclaimed tech nerd. I enjoy meteorology, internet technology, wireless telecommunications, and ice hockey. I live in Covington, Kentucky with my wife, Kim, and a small zoo of pets.

As for my life story, I graduated high school in 2006. Before then, I was a member of the first self-sufficient student-led technology team in school history. We developed the school's web site and helped staff with their technical problems. By the time we all graduated, administrators realized they would be in a world of hurt, so they hired someone to do what we were doing.

After graduation, I did web development and business systems support for three years. I learned more in this position than I ever thought I would care to, and had a good time doing what I did. In the end, web development got really old and the company I worked for wound up closing its doors, sending its clientèle elsewhere.

Later that year, I was asked to join the team at a local CPA firm. Their building had suffered from a fire earlier that year and I was part of the group responsible for getting them back up and running in a new temporary location by 8 AM the next morning. I ended up staying until mid-2012 despite originally being asked to help for just six months. During that time, we acquired two other firms and I led the effort to integrate their systems, networks, and data.

My time in public education began with the 2012-2013 school year. I found myself disillusioned with working in the private sector, because I had spent a few years working in a business that only understood value in billable hours. As a technician, I didn't provide many of those for the firm. Working in education gave me that sense of purpose I find so valuable. I spent just over a year as a technician at my alma mater and found my way to northern Kentucky by way of two other school districts as the network administrator.

In 2021, I was contacted by a recruiter for a broadcasting company. At that point I made the difficult, but ultimately correct, decision to go from education technology to broadcast IT. I've had somewhat of an interest in broadcasting since I was a kid, so I believe it's a perfect fit!

I've also done many technical things as a hobby. During the January 2009 ice storm, one of my coworkers and I were stuck in our office for a week. In that time, we conceptualized a method to share emergency information using then-new social media services like Twitter. Our pet project, TriStateAlerts, was born from the ordeal. The project soon evolved into a severe weather alerting service. In 2010, local media showed an interest in having the TriStateAlerts software power similar services for their own audience. Realizing the potential in what we had done, TriStateAlerts incorporated and started offering the services of our software, rebranded as "Weather4Me Alerts". This project has gone by the wayside, but some of the code I wrote for it is now on GitHub.

Fueled by the excitement of wireless engineering, which I had done for work in the summer of 2009, and slight prodding from a friend, I tested for and received an amateur radio license in February 2011. Today, I hold an Amateur Extra class license, callsign KN9FOO (for KungFoo, my old IRC nickname). My main interests are amateur radio's relationship with technology (e.g. HSMM, Asterisk-powered repeater controllers, etc.) and I enjoy ragchewing on local 2-meter repeaters. I have also been known to operate PSK31 over HF, and as of late 2016 I have taken a keen interest in DMR after buying a TYT MD-380 and a Connect Systems CS800 mobile.

FEDIVERSE
Unless you're pretending to be me, I don't really care how much of this content or design you steal (even though I wrote all this sweet 100% totally valid HTML and CSS by hand). Do I really need legal text?
Contact: Drew@DrewKirkman.com